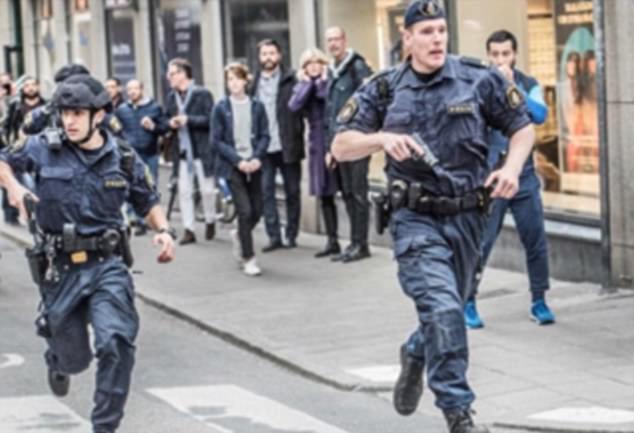 To the Dagens Nyheter

Supreme Court of Lithuania crucified a medical woman, who in Sweden slaved for labour slums

At the Social Summit for Fair Jobs and Growth, taking place on 17 November 2017, in Gothenburg Lithuania‘s President Ms.Dalia Grybauskaite was not able to answer to a question of Swedish journalist: „Why Lithuanians in Sweden must work harder but make money less than Swedish people?“

More than ten years a subsidary of Norvegian company in Lithuania, EU,  hires cheap labour from Eastern European countries and provides nursing services in Swedish hospitals. The company pays only the minimum wages and sends medical women having the sole aim of offering lower labour costs than those of local workers, ie the conduct, that offends against the rules of fair competition in Sweden.

In 2015 the subsidary of Norvegian company concluded employment contract with a medical woman in Vilnius, Lithuania. As it stated in the employment contract, she was promised to receive the salary, quarranteed in Sweden. Also the parties agreed that all the emploee‘s benefits, indicated under Swedish legal requirements regarding payment of quarranteed salary, are secured. The company sent the Lithuanian lady to carry out nursing work at the following hospitals: Skånes universitetssjukhus in Malmö, Mora lasarett, Falun lasarett, in the municipalities of Skåne and Dalarna in Sweden.

In 2016 the Lithuanian medical woman terminated employment contract. The lady considered that the Norvegian company did not pay her a salary – the total amount of the claim EUR 17 000. She brought an action before the District Court of Klaipeda City in Lithuania, the case No. 2-5770-911/2016. On July 21, 2016, the District Court gave a decision –  the court refused to satisfy the requirements of the nurse. Lithuanian lady appealed to a higher court – the Court of Klaipeda County against the Norvegian company. Again she had no success in the process of litigation. To resolve the industrial dispute between parties, in 2017 the medical woman (demandant, claimant, petitioner) brought an action before the Supreme Court of Lithuania. The case number is 3K-3-306-248/2017. The Supreme Court examined the case brought by the medical petitioner to Norvegians and issued a verdict rejecting her claims in full.

The demandant argues that the Norvegian employer did not justify her legitimate expectations, since the emplyer did not ensure a normal workload in Sweden – at least 40 hours per week. The Lithuanian lady suffered losses – her average monthly salary in Sweden was twice lower than she was paid when she was employed in a hospital of the city of Vilnius. It is evident that in Sweden the petitioner suffered losses also due to food prices that are several times higher than in Vilnius.

The author of the text has carried out an analysis of the court ruling, so he further expresses his opinion that the Supreme Court violated the rules for the appraisal of evidence, incorrectly interpreted and applied the rules of substantive and procedural law and departed from the practice of interpretation and application of law formulated by the cassation court.

The panel of judges agreed with the cassation appeal argument that the District Court of Klaipeda City committed a fundamental breach of procedural law – unreasonably rejected the claimant‘s request to collect data on her salary rates from the Swedish hospitals in which she worked. Consequently, the panel of judges found that the rules for assessing evidence had been violated: the lower courts had made judgments without having obtained sufficient evidence of wages. This fact clearly prevented the District Court of Klaipeda City and the Court of Klaipeda County from giving fair and lawful rulings.

However having checked the lawfulness and validity of the decisions of lower courts, the Supreme Court made the same mistake – when making the conclusion regarding salary level of the claimant, the court again did not collect data on wage rates from Swedish hospitals, but relied on the same insufficient data on wages. Thus, we can conclude that the Supreme Court did not check the legal evidence entirety and impartially. For this reason, the claimant (medical woman) lost the case – the courts refused to award her the correct amount of salary.

Labour Code of Lithuania states, that employees posted to a particular Swedish (or any other country of EU) company (or hospital) are in practice entitled to the same monetary remuneration as local Swedish  employees working for the same company (or hospital). It means that, for instance, if a person was sent by Lithuanian company to perform nursing services at the site of the temporary work user the Falun lasarett,  Lithuanian company must pay the same amount of salary, as if  he worked for the Falun lasarett  having concluded direct employment contract with it. The only problem is to receive salary calculations based on my real hours worked at a particular Swedish hospital.

The Supreme Court, in the absence of objective data on the actual wages made a false assumption that the Swedish hospitals – Skånes universitetssjukhus, Mora lasarett and Falun lasarett – were able to pay the claimant lower than the average salary.  The author believes that by doing this the Supreme Court again infringed the rules of the evidence assessment. To justify this supposition, the court had made two further assumptions that: (a) not the petitioner‘s international medical license, but that the Swedish language is a significant factor in the proper performance of the work; (b) the petitioner‘s possession of the Swedish language level B1 precluded the petitioner from receiving the amount of remuneration guaranteed by Directive 2008/104 / EC of the European Parliament and of the Council.

Moreover, the court did not assess the fact that the Swedish hospitals did not complain that the Lithuanian lady was unable to perform his professional activities properly due to knowledge of Swedish language. On the basis of the above, the author thinks that the Supreme Court once again violated the rules of the evidence assessment – the evidence was not investigated thoroughly and impartially. The author concludes that the courts have incorrectly addressed the issue of outstanding pay as a result of failure to comply with the provisions of Directive 2008/104 / EC.

The Supreme Court, even without referring to specific norms of Swedish law, relied on another assumption that the subsidiary of the Norwegian company registered on the territory of Lithuania had paid taxes from the claimant‘s salary to the Swedish state budget. However, the employer has not provided evidence that these fees have been transferred to the bank account of the Swedish State. It can not be accepted that the courts deducted 30 percent – the „Swedish“ tax – in calculating the hourly rate of salary. Why did the courts decided to increase the claimant‘s fees knowing that the employer is registered in Lithuania and paying only 24 percent tax to the Lithuanian state tax inspectorate? The answer could be that by deducting larger („Swedish“) taxes from the salary may lead to a reduction of salary so that it would be possible to conclude that the employer has paid the applicant right amount of salary.

The Supreme Court of Lithuania made even more striking conclusions. Since the Norwegian company did not provide the claimant with normal workload at a medical facility, the woman actually worked for only 182 days a year, when we all know that there are 365 years in a year. The court named the period of  forced unemployment of a medical woman as „rest days“. However, the Supreme Court of Lithuania has also accused the Lithuanian lady that she did not prove that 3 months‘ period of forced unemployment is not her rest days. As a real mischievous ridicule, there is an excerpt from the employment contract cited in the court order that the parties of the dispute clearly agreed on work based only on demand: „The employee shall work as many working hours as agreed with the work user.“ This means that in the event that the employer does not (or does not want to) find job for the medical woman in Sweden, the lady has to suffer involuntary unemployment for which the employer is not obliged to pay.

It is not possible to suppose that in the history of the Lithuanian medical woman the courts demonstrated a humanistic attitude to the working person and correctly resolved a socially sensitive issue – the labour dispute in ensuring the adequate protection of the interests of the litigant, which in the labor relations is assessed as weaker. Unfortunately, the Supreme Court has done the opposite of everything it needs to be done.

In my opinion, by using sophisticated methods of smashing people exploited in labour slums,  judicial authorities of Lithuania can help lay the foundations for the modern slavery system (forced labour exploitation) in the Kingdom of Sweden. Should one understand that by using the methods mentioned above judiciary demonstrates true respect for human dignity and does the right service to the community of health workers fighting for the constitutional right to a fair remuneration?